This large genus of shrubs which also includes Azaleas, are not just the staple of large gardens of stately homes with acres of garden. They are however invaluable as woodland edge planting and as a dramatic evergreen backdrops with riots of colour for the large boarder. Or to be used as individual specimens in a small mixed planting. Also as shapely container grown specimens on a patio. 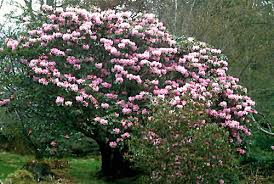 Rhododendron fulvum: For an outstanding Rhododendron that has presence and is a specimen this is a hard variety to beat. It is fully hardy a large shrub/small tree. With cinnamon bark and clusters of large leathery dropping leaves with sandy indumentun beneath. Clusters of bell shaped blush to rose coloured flowers opening to a clear white with a crimson blotch are produced from April till May. 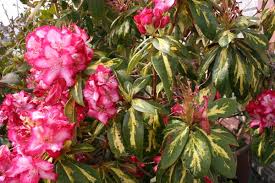 Rhododendron ‘President Roosevelt’: Good domed habit reaching 1.5m high. Clusters of mid green foliage with a bold golden central splash make this a wonderfully distinctive Rhododendron to grow in a pot giving a great splash of colour even in the winter months. Clusters of bright red flowers with a white throat are borne in April till May. Fully hardy.

Rhododendron Yorkshireman ‘Grumpy’:  The ‘Yaks’ are a great group of small compact Rhododendrons with a distinctive growing habit and very attractive glossy green foliage with pronounced indumentum in soft cream on the under side of the leaves and Grumpy is one of the 7 dwarf series of hybrids. These slow growing rhododendrons are worth the wait. Orange buds open to delicate cream bell shaped flowers with tints of pink and spotted buff on the upper lobes. Flowering in late May.

Rhododendrons making the highlight of a mid summer woodland garden.

Rhododendrons have been shunned and under used in recent years by garden designers and keen gardens alike. With bad press of being big green blobs with flashy bright flowers, but this is bad garden sighting not the shrubs themselves. Rhododendrons and Azaleas can be magnificent and just need a sensitive hand when planning their use and it is high time they re-entered centre stage in the garden.

“Arcadia Garden Design has transformed our garden from lifeless and little used into vibrant and exciting area with year round colour and interest.”