As summer enters fall speed there is nothing quite so worthwhile and wondrous as growing your own soft fruit. However small a space you have, you can normally fit something in. From Raspberries, Red Currents, Gooseberries, Loganberries, Strawberries and Black Currents, the choice is many and varied. Soft fruit is relatively easy to grow and not as time consuming as vegetable growing, so ideal for the time stretched gardener. Here are a selection of good varieties to get your taste buds going.

L.LY59: A variety which is now harder to obtain, this variety is worth the fruit nursery search. Grows well in most soils but not waterlogged soils. Large maroon fruits, with an acidic tang fruiting in June. Good cropper ideal for preserving, freezing and jam making.

S. Cambridge Favourite: best in lighter soils but will grow in rich soils if well drained. One of the earliest fruiter and one of the most reliable. Vigorous grower and crops well over a long season. With large pink to red sweet fruits.

S. Elsanta: Same growing conditions as above. This is the strawberry with the longest cropping season from mid-June to mid-July. With good sized fruit and excellent flavour, becoming a favourite of supermarkets.

B.Sarek: A dwarf variety ideal for the small garden, Frost and mildew resistant and high yields with large fruit.

With the thought of popping up the garden to pick a fresh bowl of fruit with a dollop of cream or ice cream, or the thought of frozen berries for out of season pies, or jams and compotes, who could not be tempted by the sheer culinary delights of growing your own soft fruit.

With so many varieties of delicious fruit to choose from, this is a good time of year to do a bit of ‘tasting’ research to decide on the ones you like best and will suit your garden’s growing conditions. Ready to order the plants from fruit nurseries late summer for bare root planting in the winter months. If you would like help with selection and planting your soft fruit. Then I know a lady who can, give me a ring Tel:01273 470753. To advise and help you.

As the days begin to shorten and the evenings and early mornings start to gain an autumnal crispness September brings the bulk of the apple harvest. With small trees, cordons, espalier and even step over apples, there is surely space in most gardens for this most quintessential of English garden fruit.

Sizes: M27 is on a root stock that will grow to approx. 2m in height, so easy for picking and pruning. If how ever you want to have an apple tree to sit under then you should chose MM106 which will reach 4 to 5m in height and give you that traditional Orchard look. There are root stock sizes in between, ask your nursery for advise.

The best time to plant apple trees is in the bare root season, when the trees are dormant, from late November to early March as a rough rule of thumb.

Pollination, apart from the self-fertile varieties all apple trees will need a pollinator variety. So if the tree you choose is in pollinator group 3 then choose a campaign tree from either group 3 or from an adjoining group in this case 2 or 4.

Here are some apple varieties I would deferentially give house room to. 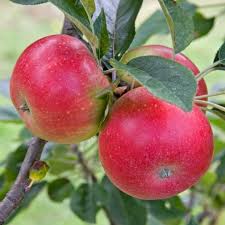 Apple George Cave: This old variety has a refreshing flavour and crops heavily and regularly. Fruit is ripe end of July and into early August. Stored well they will keep till October. Pollination group 2. 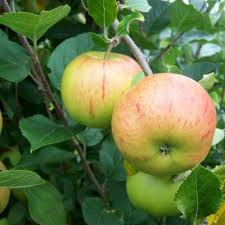 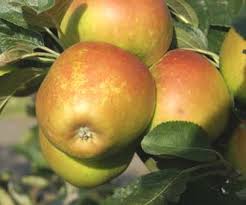 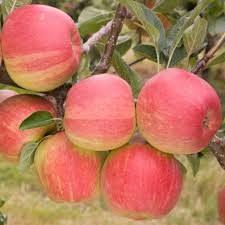 Apple Cox’s Orange Pippin: This surely above all other apples must be the variety that evokes home grown apples and quite rightly so with it’s distinctive aromatic crisp and juicy flavour. Fruits are golden flushed red and orange. Pick September into October, will store till November. 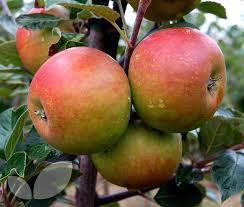 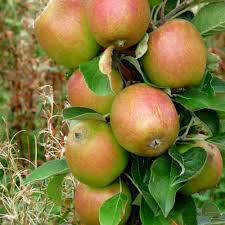 As the name suggests, both for cooking and eating, the apples start with a tart flavour and then mellow with storage into an eater.

Apple Blenheim Orange: one of the best dual use apples with large golden fruits, that has a creamy flesh which is crisp,dry with a nutty flavour. A heavy cropper. Pick early October and store well to January. PLEASE NOTE: this variety is a triploid, so it needs 2 pollinating apples, Pollination group 3. 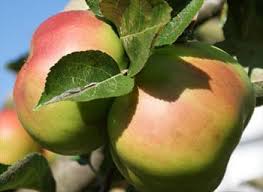 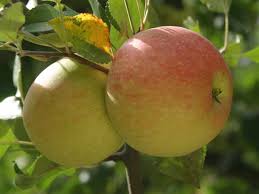 What Sunday lunch in the autumn could be with out Apple Pie? Here are tow varieties that are packed full of flavour.

Apple Bountiful: This is a compact variety that will fit well into a smallish garden. Large green fruit blushed red, with a juicy crisp flavour. It is a heavy and regular cropper. Pick late September and store well, till March. Pollination group 3. 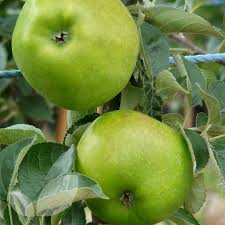 Apple Bramley’s Seedling: By far the most popular cooking apple of them all, it’s large trees produce branches laden with fruit and it will no doubt be this variety of apple that your friends and neighbours are piling upon you in bucketfuls of free gifts. It is a prolific cropper of large round green/yellow fruits with a firm white flesh and strong crisp juicy flavour, that makes great pies! Picking time early-mid October. Store the fruit well and you will still be making pies well into early spring. Pollination group 3. 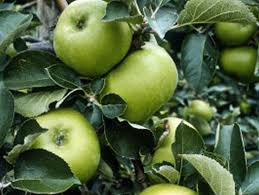 Storage: It should be a clean, dry and dark space with some ventilation and free from mice, and any strong flavours or smells do not store with the onions or next to the creosote. Pick when it is dry weather, line with newspaper low plastic or wooden  boxes. Dry fruit and carefully make sure the fruit you store does not have any blemishes. Place fruit in rows. Check your fruit boxes at least once a week to remove any apples going rotten the paper may well need changing at this point.

So now is the time to go and do some edible research, whether it is sampling the fruit of friends and neighbours and taking note of which varieties you like or going to some Apple Day events, at Brighton Apple Day 2nd October www.brightonpermaculture.org.uk or Apple fair at West Dean 1&2nd October www.westdean.org.uk Or RHS Wisley has a huge variety of apple trees and sells different fruits for you to try.