As the clocks go forward and the equinox has passed Spring has well and truly sprung, but spring is not all about bulb power there are many early flowering shrubs that act as great specimens in their own right as well as a flowering backdrop to all those sweeps of colourful bulbs. 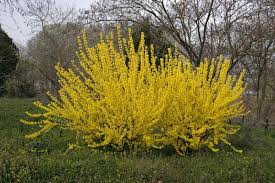 Forsythia x intermedia ‘Lynwood’: Forsythias may seem a bit common place and in some eyes even gaudy, but they are a rich golden splash at the back of a border especially if backed by evergreen planting and will sing out from the bottom of the garden even on the greyest of April rainy days.

A bold up right habit, the stems are covered in rich golden flowers, mid- March to mid April. The leaves appear after flowering. Medium sized deciduous shrub, will grow well in full sun but will cope with some shade. Will grow in most soils including poor chalk, but does not like waterlogging. 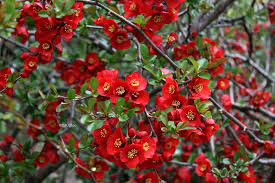 Chaenomeles speciosa ‘Crimson and Gold’: A wonderful early flowering shrub, that can be planted in a border or trained up a wall. The wide saucer shaped red flowers with brilliant golden anthers appear before the leaves from the end of February through to early April. The thorny branches produce round yellow fruits in the early autumn. A medium deciduous sized shrub will cope with most soils, protect from drying out when planted up a wall.

Coronilla glauca ‘Variegata’: The trouble with this shrub, is it, just does not seem to stop flowering! A medium sized shrub with delicate evergreen grey foliage which is white edged. Delicately scented clusters of rich yellow pea shaped flowers appear in mid March for the main flowering season but the shrub will continue to flower intermittently through out the spring, summer and into the autumn. Grow in full sun and best in poor free draining soils. It is not fully hardy but will grow well in the S.E of England.

Corylopsis willmttiae: A shrub with a graceful wide spreading habit which is deciduous. Grows well in semi-shade as it is a plant of the woodland edge. It likes humus rich soils but will grow well on chalky soils if enough organic material is added and it is not allowed to dry out. From early march to mid April slender tassels of primrose yellow flowers are borne along the branches. The flowers are followed by the rich purple leaves.

Ribes sanguineum ‘Tydemans White’: Perhaps as ubiquitous in early spring as the Forsythia is the shocking pink of the Ribes, but this white form has all the robustness of the common form including its masses of flowers over a long flowering period but has a more delicate charm. A medium sized deciduous shrub with a gentle arching habit. That will grow on almost any free draining soil. Long racemes of white flowers are produced from mid march to mid April.

Most early spring shrubs produce their mostly delicate flowers on bare stems so to full appropriate their flowering impact, plant them either on mass in a group of at least 3. If you haven’t the room then they can be great specimen shrubs but need an evergreen ‘backing’ shrub to fully enjoy the flowers, and to create that ‘wow’ early spring impact.

If you need help to reinvigorate your garden to give it that early spring ‘wow’ factor then I can help you, from producing a planting plan for a corner of the garden or for a whole boarder, through to supplying and planting. Please do ring me. Tel :01273 470753.

“The design of our end-garden exemplifies a dementia-centred approach. Residents and family now have a tranquil spot to spend calm time together.”