The case studies are a more in depth look at a group of very different garden projects. From the client brief through the site location and constraints, the design solutions, landscaping, planting and the finished garden.

A new conservatory needed to be linked to the rest of the garden. Other requirements were to give the garden a stronger identity and to make more of the sea views. This low maintenance garden would mostly be viewed from the conservatory.

The garden had been extensively landscaped in the past but was now overgrown and lacking in structure. It was dominated by a large conifer, which took up a lot of space, and overgrown shrubs which blocked all views of the sea.

The design ideas for the garden came from the general bold shapes and geometric designs from the house interior. This inspired the interlocking circles of the lawns and the strong lines of planting. The planting was low, so views of the sea could be enjoyed from the new seating area under the rose arbour. A series of wide, low steps linked the conservatory with the garden, and a water feature was positioned to be seen and heard from the conservatory. Landscape work took 8 weeks. 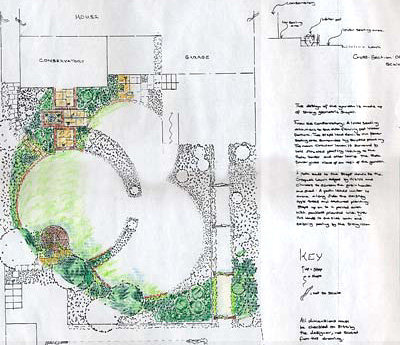 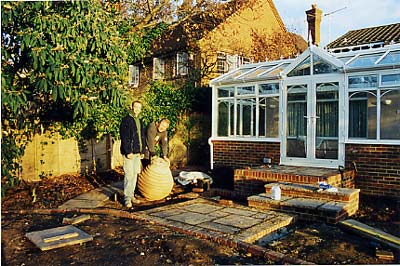 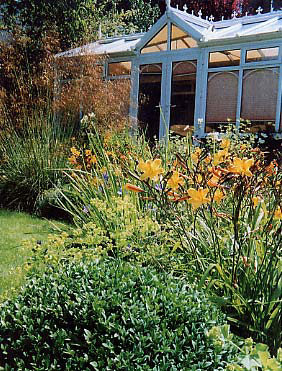 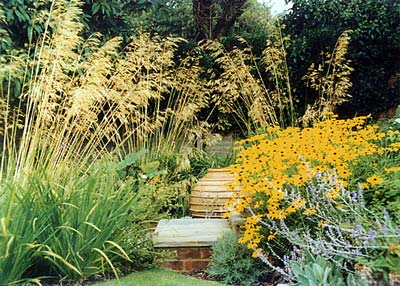 The client wanted a pond rich in wildlife, with areas providing access with seating at the water’s edge. It also needed to be big enough to sustain a balanced environment.

The new pond was to be in a sloping field, which is not a natural place to site a pond There was also the problem of overlooking houses.

Cut and fill was used to fit the pond into the existing landscape with the spoil graded in to the field levels. The lower slope was used as a seating area with a large bench so that the pond could be watched. The upper edge was planted with trees to help screen the overlooking houses.

A jetty was constructed to link the pond to the garden. The jetty provides a route through the reeds and over the water to watch the pond life. To protect fish from hard winters, a deep water area was constructed. The pond was planted with a combination of ornamental species and native plants, linking with the traditional planting of the country garden. 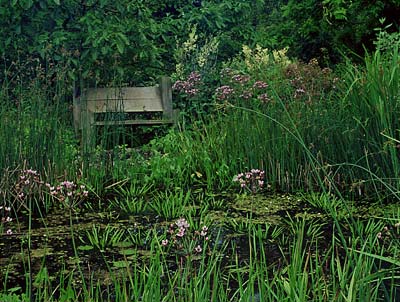 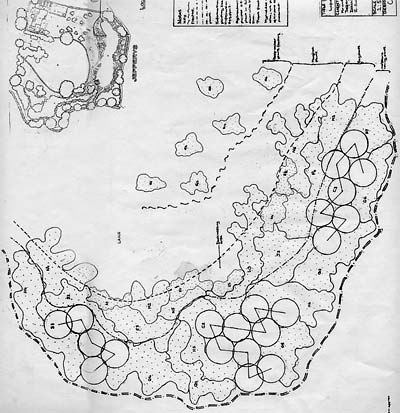 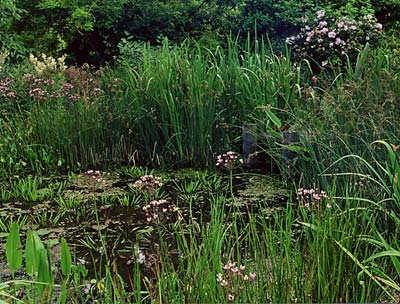 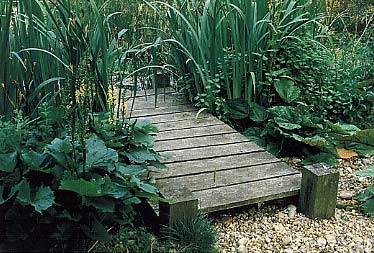 Turn this small garden space into a low maintenance garden, which would be a haven to relax in after a long day at the office. The client wanted the garden to be stylish with a modern feel.

The existing concrete was only one brick course below the DPC and covered half the air bricks, so it was likely to cause a damp problem in the living room. Not only would the concrete have to go, but a large amount of digging out and soil had to be removed which would eat into the budget. Lowering this level would make the garden even lower than the gardens on either side, so retaining walls along the boundaries by the paved area would be needed. The manhole covers were the most dominating features in the garden, not helped by a concrete plinth supporting the top one. Houses surrounded the garden and there was no practical way to completely screen them. The soil was very heavy clay.

The steps were to become not just practical but also one of the most eye-catching elements of the garden, by being over-sized and like shelves with room for pots, and keeping the much need retaining walls at bay so they did not dominate the space. The manhole covers were hidden under the steps but were still accessible by removing the steps.

We wanted to use organic materials which would change and weather. Wood seemed a natural choice, along with gravel instead of the high maintenance lawn. Gravel is one of the softest of the hard-landscape materials and allows plants to grow in it, softening the whole look.

The overlooking houses could not be screened but a sense of privacy could be given to the garden by a pergola. The calm, relaxed, ‘oasis’ feel was enhanced by the overflowing pot water feature and by lots of lush green planting. Landscape work took 6 weeks. 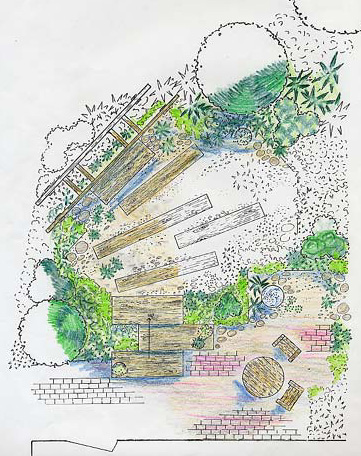 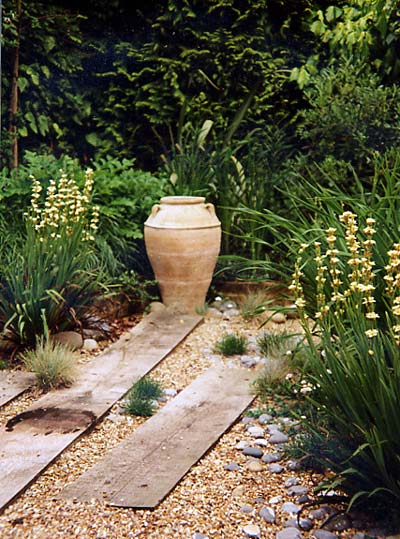 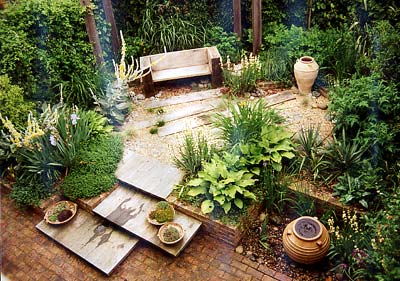 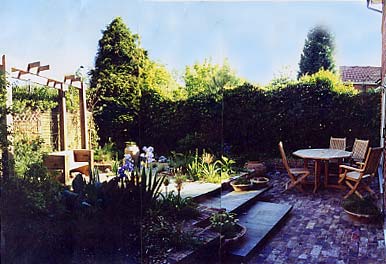 “An excellent design. A complete rebuild from scratch executed quickly and efficiently.”