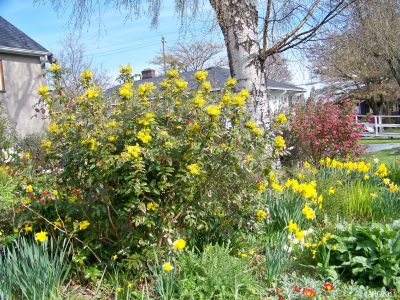 Mahonias as part of a mixed winter planting

Mahonias are a wonderful shrub, not only acting as good screening, or boundary planting, but also as a glossy evergreen back drop to flowering perennial through the seasons. But they really come into their own during the mid-winter months, with dramatic and scented flowers. Here are a few of the many varieties on offer. 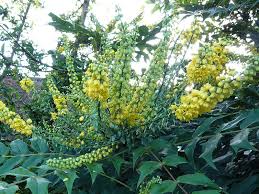 M.japonica: A large vigorous shrub, up to 1.5m in 5years. With stout stems and upright growth. A very good shrub for boundary planting. The leaves as with all Mahonias are held in spiral rosettes. With large pinnate leaves a glossy mid-green. Scented pendulous racemes of yellow flowers, December to March. Grows in most soils except dry shallow chalk. Sun part shade. 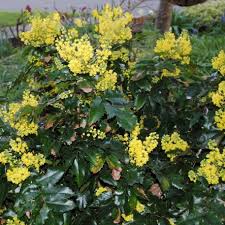 M. aquifolium ‘Apollo’: Often called the ‘Oregon grape’ as it sprawls along the wind swept coast of it’s native habitat. This more zooped up version of M. aquifolium, is a wonderful garden plant which makes a small spreading shrub, great for ground cover. It has small groups of stumpy pinnate leaves, which turn tints of wine red in the winter months. It has small clusters of golden flowers in March to April. It grows well in shade. 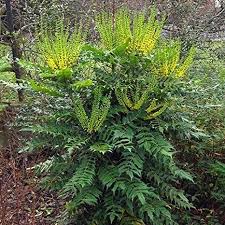 M.media ‘Winter Sun’: A large shrub with upright habit, makes a dramatic back drop to the winter garden. Large spiny pinnate leaves of dark green, with clear yellow racemes of flowers held erect on the centre of the rosettes of leaves. The flowers are very fragrant, a must for planting near the back door or route to the garage. Flowers January to March. Grows well in semi-shade in any water retentive soil. 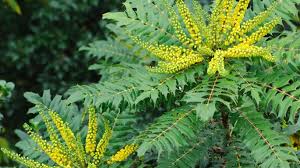 M.nervosea: A dwarf Mahonia, producing a low suckering shrub, ideal for a small garden at only 45cm tall. It has small pinnate leaves to 5cm, which turn a vivid red in the cooler winter months. It flowers late spring into April, with long golden racemes of 20cm. It will grow well in semi-shaded in most soils. 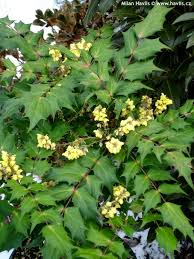 M. japonica Bealei Group: A large shrub up to 2m tall and above, with erect strong stems. With rosettes of medium length deeply toothed mid-green leaves. Short racemes of pale lemon flowers are produced in December to February. This shrub makes a good back bone to a mixed planting. Will grow in most soils, with good moisture, sun or part shade. 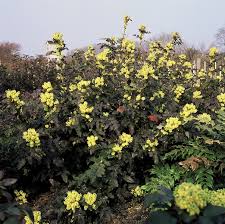 M. x wagneri Pinnacle: A large striking shrub, with lightly toothed pinnate leaves of mid -green which are a dramatic bronze when young. Golden flowers are produced in dense upright racemes in mid spring, March to April.
* 8 lots of Mahonias.

Rejuvenating Mature Mahonias; although undoubtedly one of the reasons for planting mahonias, is their vigorous upright habit, particularly if you are using them for screening. There is the chance particularly in smaller gardens that you can be looking at a lot of tall ugly stems with a small cluster of leaves on top and the flowers far above sight and well and truly above nose level for catching that striking scent. But Mahonias respond well to pruning, it is best to rejuvenate your shrub over a number of years, a 1/3 at a time. After flowering so late March approximately, before leaf busts, cut down one third of the stems to the required height, just above an old leaf junction, these can be clearly seen in the form of lines and dots encircling the stem. Over the coming growing season the stem should produce a new leaf cluster just below the cut. Repeat the process section by section over the whole shrub over the coming years. If you want to ring the changes, so perhaps having taller stems towards the back of the shrub for screening but leaf and flowers on lower stems at the front, prune accordingly. 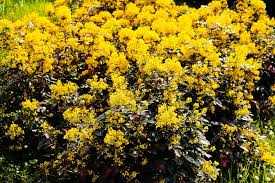 Mahonias are a versatile shrub which are often over looked as something’ green at the back of the boarder, but have far more to offer and should be planted much more widely.

If you would like help creating a winter planting scheme or just re-planting an area of your garden, mid -winter is right slap in the middle of the planting season and now is the time to do it. I know just the person to help you, give Emily a call on 01273 470753.