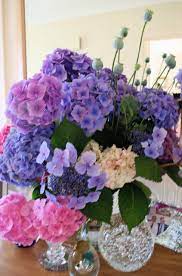 I say Heroic hydrangeas, as they are often the wall paper at the back of a large boarder or thought of as lining the drives of stately homes, but these shrubs come in a variety of shapes and sizes, lace-cap or mop heads and some in between and a variety of colours that change with age and even are beautiful as dried flowers. 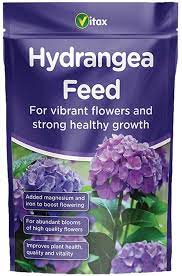 Of course over the years there has been a fashion for fiddling about with the soil pH to produce blooms of deep blue on an acid soil, a pH of less than 7 ( the lower the deeper the blue) less acidic and it heads towards purple. Pink and into deeper pink on alkaline soils with a pH  above 7.  Personally I think the joy is letting your Hydrangeas just colour with what your soil is and see how they change in  different planting potions, but of course if you have picked a “ Blue” variety and you are on natural to alkaline soil, the chance it it will not be a deep  blue at all, so don’t be disappointed. They need a good humus rich damp soil, in dappled shade, but will cope with full sun. flowering from July to the end of September.

So baring all of the above in mind, here is a selection to consider. 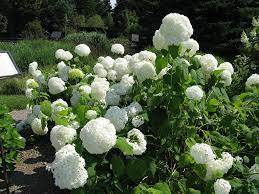 H. arborescens ‘Annabelle’: This has been the hydrangea of the moment or the last 7 to 10 years at least as the ‘new’ designer fashionable one that started to pop up at Chelsea in main avenue gardens and it is certainly a show stopper. A medium sized shrub with a floppy open habit, of large white to flushed green flowers up to 30cm across freely produced from July to September. 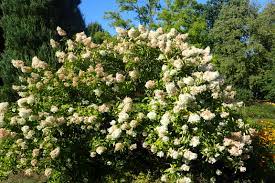 H. paniculata ‘Grandiflora’: A large shrub, with a mass of panicle shaped flowers of sterile florets appear in August and become a deep pink towards Autumn. 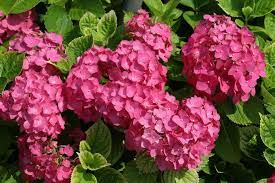 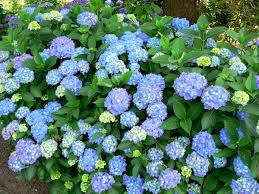 H.  macrophlla ‘Blaucer Prinz’: A medium sized shrub. A good mop-head variety, with heads that are shades of pink into deeper red on alkaline soils and shades of purple into deep blue on acid soils. 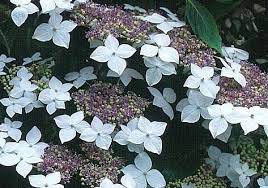 H. macrophlla ‘Lanarth White’: A small to medium sized shrub with a neat compact habit, one of the best lace-cap varieties. It produces large flattened heads, with central flowers which are pink on alkaline soils and blue on acid soils , surrounded by white florets. 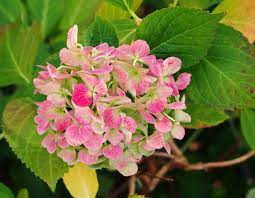 H. macrophlla ‘Madame Emile Mouillere’: a medium sized shrub with large mop head flowers of white florets with a pink or blue centre depending on soil pH. With serrated sepals. 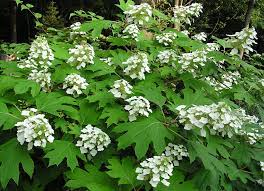 H. quercifolia: This unusual hydrangea has, leathery deeply lobed leaves, oak like in shape, with a white underneath that turn a blistering coppery red in the autumn. It produced large creamy white shaggy panicle s of flowers in August. It is a medium sized shrub. 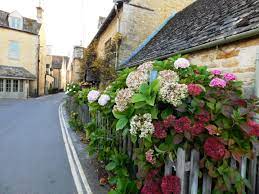 A mass of Hydrangeas.

I hope I have made you think again about these shrubs that fell out of fashion and were considered some what Victorian, they are beginning to be planted more widely and have must to offer, in fact what is not to like about Hydrangeas.